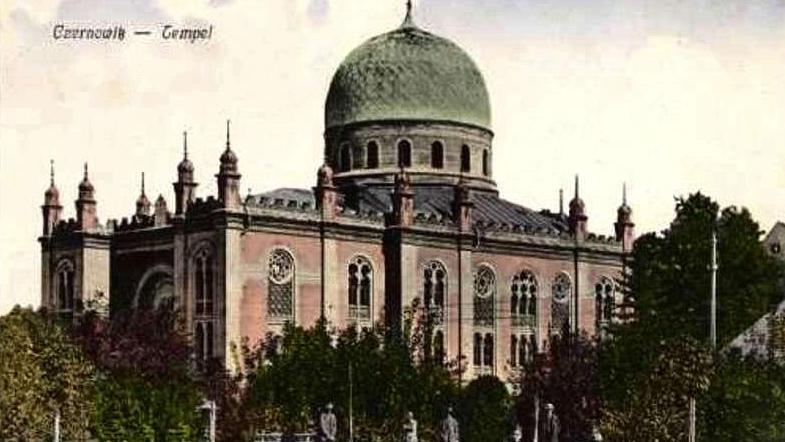 And they went to work. I happened to be on the street at that time because the Soviets, when they retreated, put to the torch the center of the city where my family and I lived at the time. While we were trying to salvage whatever we could from our building, our neighbors' buildings were burning all around us. We saw some of the things that happened when the Germans and Romanians entered. I happened to see when a German truck, military truck, stopped in front of the temple of our city. We had a magnificent temple built in the eighteenth century, a huge, beautiful building. The temple was on top of a hill, so it was visible from many parts of the city. And I just happened to be with my mother on the street when a German truck stopped in front of the temple and an officer got out. He stopped in front of the temple and looked like this, you know, at the facade, and then he ordered his soldiers to break down the entrance to the temple. Then they rolled out from the truck two drums--we realized later it was petrol or gasoline or diesel, whatever, fuel--which they took into the temple. They probably spilled the entire contents from these drums onto the floor of the temple, threw a match, walked out and left. Soon the whole temple was engulfed in flames. It burned the whole day; it burned the whole night. We could see it where I was because I, with my family, had to flee our building because of all the flames that were burning. So I was standing not far from the temple in one of my mother's sister's apartments, and I could see that, through the windows at night these huge flames coming out from all the windows of the temple and through the large dome, the magnificent big dome. And in the morning, I could see only the black girders of that dome... and the black walls of the temple still standing. (Quelle: http://www.museumoffamilyhistory.com/iayc2008-scherzer.htm)